It gives me great pleasure to announce that on Sunday 14th April from 10.00am – 12.00pm Martial Arts Legend ‘Ian Gauldie’ will be coming to Blaze Martial Arts to run a two-hour seminar for us.

Ian is a martial arts teacher whose experience spans over 40 years of teaching, training and competing in martial arts at the highest level. 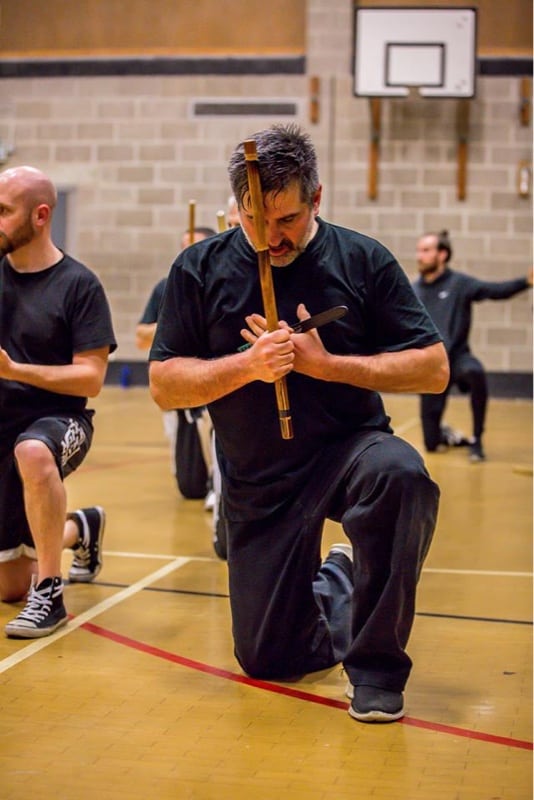 Like so many of his age, Ian was inspired to take up martial arts training by Bruce Lee.  On his seventh birthday he enrolled in the ‘Lions Judo Club’ in Hounslow and has not left the mats since.

He has studied under, and trained alongside, martial arts legends in this country and internationally.  Ian’s teaching draws from this depth of experience, embracing many different arts and cultures, integrating traditional arts such as Ju-Jitsu, Aiki Jitsu, Kickboxing and most recently the Filipino martial arts.

Over his lifetime Ian has held numerous internationally recognised titles including the BKBU (British Kickboxing Union) British title at both light heavyweight and middleweight, and twice held the WUMA world self-defence title.

Ian began his teaching career aged just 16 by coaching a handful of friends. From there his continued commitment and experience has led to him becoming a full-time martial arts instructor with an organisation of over 700 students. Throughout his career he has awarded over 160 black belts, all of whom trained under his guidance, and coached students to compete nationally in combat ju-jitsu, kickboxing and other combat disciplines.

Ian is also a National Trainer for the ‘Cobra Martial Arts Association’ and the ‘Martial Arts Instructor UK Qualification’.

Ian holds a 7th Dan Black Belt and regularly teaches at national and international seminars and workshops and this year will be running seminars in the Isle of Man, Spain and Los Angeles.

With four decades of martial arts training and teaching under his belt, Ian now has students all over the world who have continued their martial arts journey and credit him with starting them on that journey.

I am very honoured to welcome Ian down to Blaze where he will be running a two-hour seminar for us all covering Japanese Ju Jitsu, Aiki Jitsu, Silat, FMA (Panantucan and Stick & Knife training).

The cost of the seminar is just £5.00 and if you would like to join me then it has to be on a first come / first served basis as spaces are limited.

Due to the nature of what will be taught I have to set a minimum age of 10 years.

Email me at [email protected] to register your place.

I look forward to seeing you there.

BACK TO BLAZE BLOG
PREVIOUS
NEXT